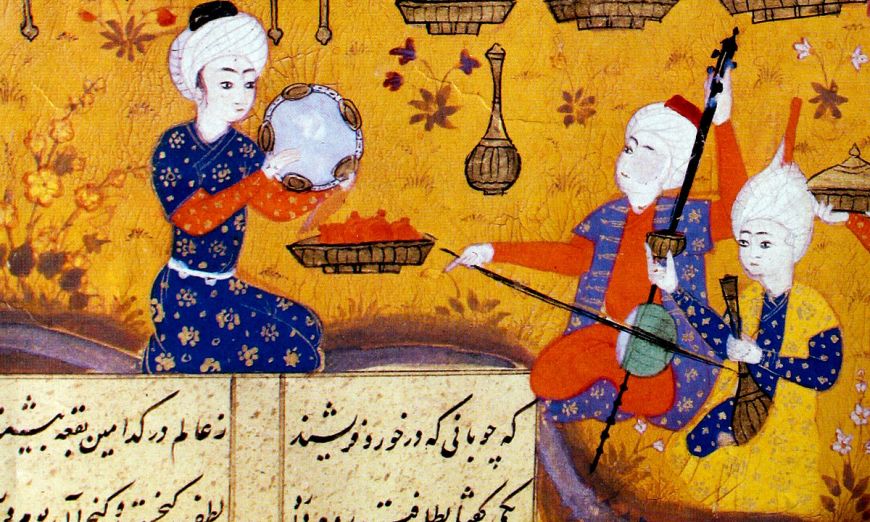 Tags:   Azerbaijan   Discover   Tourist   Travel
Azerbaijan is a country of ancient and rich folklore traditions, the origins of which go back to the centuries.

Azerbaijan is a country of ancient and rich folklore traditions, the origins of which go back to the centuries. And, probably, the most important place is taken by folk music, cultural monument that synthesizes past and present.

But, what do we know about Azerbaijani musical instruments? Probably not so much.

One of the most ancient places of human settlement rightly stands as an ancient cultural center.

Along with the primitive tools, ancient people created the first musical instruments to satisfy the needs of their spiritual life.

Some of them passed down through the ages, while others have already been forgotten.

Najafzade divides the musical instruments into several groups, including idiophone, aerofone (woodwinds), chordophone (stringed) and finally, membranophone, when the sound is produced by striking, rubbing, or blowing against a membrane.

Scientists believe that about 40 idiophones have been used in Azerbaijan in different periods.

Among folk instruments there are those you first time hearing about.

Balaban refers to aerofoams. The silver ring, which is more than 2,000 years old, have been discovered during archaeological excavations in Bargoed village of Ujar region.

Ring with the blue stone imprinted the image of Balaban. The word "Balaban" combines two Azerbaijani-Turkish words "bal" and "ban".

“Bala” means small or fragile and “ban” is an archaism which means “voice”.

“The Armenians call Balaban as 'duduk'. The prototype pipes is tutek (reed pipe), the name of this tool is mentioned in the epos of "Kitabi Dada Gorgud". The word 'duduk' used to mean "false sound" is the Turkic word. But it doesn't possess any scientific etymological meaning in Armenian language," said Najafzade.

The oldest music chang is considered to be the prototype of the harp.

The name of the first performer on this instrument in Azerbaijan is unknown. However, the oldest chang performer was poetess Mahsati Ganjavi. In his works, Nizami also notes the name of Nagisa, master harpist and composer of the royal court of King Khosrau II of Persia.

Kamancha is a bowed string instrument, the birthplace of which is the Ancient Egypt.

In Azerbaijan, the musical instrument was widespread in the 7th and the 8th centuries. The name of the instrument comes from the combination of the words "bow" ("kaman") in Farsi and "play" ("chal") in the Azerbaijani language.

After the loss of one letter, it began to sound as "kamancha". The word is often met in poems of such classics as Nizami, Fadi, and Masihi.

Such an instrument was discovered during the excavations in Iranian Azerbaijan, in the city of Gigamesh.

The articles about such interesting finding have been published by UNESCO, the magazine "Peyam". Later, music instrument appeared in article "Grandfather of the orchestra" written by literary critic Abulfaz Husseini.

The travelers, ethnographers and envoys, who visited Azerbaijan in different periods of times referred to the music instrument as drum.

Dumbala and davula are the names given to naghara in ancient times. The word entered Azerbaijani language after the spread of Islam and Islamic literature in the 7th century.

One of the most wonderful folk wind instrument "nei" first appeared in the Stone age.

Nei is a Sumerian word which means "singing reed". The folk instrument can be made only from savory reed.

Turkic-speaking ethnic groups referred to folk wind instruments as "lip gopuz" due to it's similarity to the sound produced by mouth.

Tar is one of the most beautiful folk instruments played with mediator.

Tar is made of mulberry, walnut and pear trees, open side of the body is made of cattle heart membrane. Its strings are of different thickness and composition.

The legendary composer Uzeyir Hajibeyli wrote that the folk instrument was invented by philosopher of Turkish origin Al-Farabi in 9th century.

Tar is a musical instrument of only Azerbaijani Turks.

In Azerbaijani language, this word has a variety of meanings, including  "aromatic", " fragrant ", " to extend", "to spread",  "pleasant combination", and "to comb".

Music and craftsmanship of Azerbaijani tar, one of the ancient stringed instruments, was included into the UNESCO Representative List of the Intangible Cultural Heritage of Humanity.

The oud is a pear-shaped stringed instrument with 11 or 12 strings grouped in 5 or 6 courses.

Renowned musician and writer on the theory of music, Abd al-Qadir al-Maraghi believed that the oud was invented by the grandson of the prophet Adam (7,000 BC).

According to another version, the ancient oud was made by Greek philosopher Pythagoras in the 6th century BC.

Nuriyev believes that the discovery is related to the Kura-Araxes period of the Bronze age. The sample is kept in the Museum of Culture of the city Barda.

Zurna is a wind instrument with a strong, high tone, is widespread in Azerbaijan.

The remains of four wind instruments, made of deer antlers were found by archaeologist Gardashkhan Aslanov near the city of Mingachevir in 1947.

One of them had six holes for sound. Specialist implies that the instrument was put on the cane, like the zurna. The prototype of the zurna is kept in Azerbaijan History Museum.